The proceeds benefit the Westwood Historical Society’s programs completely supported through membership, grants, and private donations and conservation projects as well as the Fisher School. 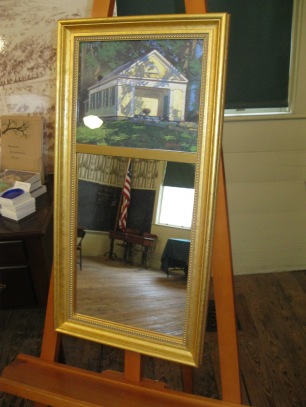 A limited edition signed prints of Tom Dunlay’s oil painting of the Fisher School are available at the Fisher School. In 1997 the Westwood artist was commissioned to paint the Fisher School to commemorate Westwood’s 100th Anniversary. Westwood resident, Tom Aaron who owns the original oil painting, has collaborated with Tom Dunlay and both have generously donated a limited number of colored prints to the Historical Society. The prints are signed by the artist. The 11 x14 unframed print sells for $60. Also available is a charming 18×8 mirror with the 5×7 print set in the top section at $150. 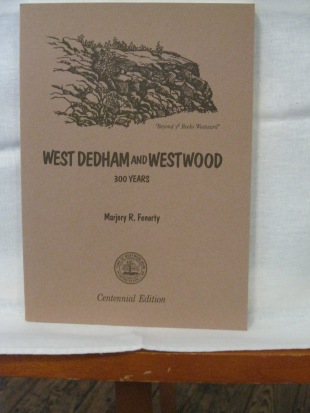 In 1997, for Westwood’s Centennial, the Historical Society republished West Dedham and Westwood 300 Years by Marjory Fenerty. Originally published in 1972, the book is an important resource for Westwood’s history from the 1600s to the present, and a gem for history buffs. The new edition includes historical photographs, maps, and an addendum by Editor Lura Provost bringing the town’s history up to date. Each chapter is illustrated by pen and ink drawings by renowned Westwood artist, the late Margaret Philbrick. Mrs. Philbrick worked in watercolor, oil, and pen and ink, made etchings, collographs, and serigraphs, and was internationally known for her designs of Wedgwood Commemorative Plates. An accomplished artist and illustrator, Margaret exhibited throughout the country and in several foreign countries. She won many awards and has permanent collections in the Library of Congress as well as other important museums. She sketched the Fisher School for the addendum of this Centennial edition. The 105 page book sells for $20 a copy. 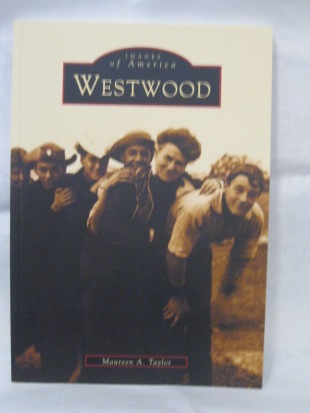 The Westwood Historical Society worked with Maureen Taylor to produce a Westwood issue of the Images of America series by Arcadia Publishing, a photo-history of the town. Maureen, a former Westwood resident, specialist in antique photographs, and author of three books in her field, gathered suitable photographs and edited the captions. Early Islington and West Dedham photographs of people, places, activities, and events are the subject of the book which gives us a wonderful glimpse of earlier days in Westwood. In addition to the Historical Society, sources are the Library, the Westwood Police and Fire Departments, and privately owned photographs. The copyright is retained by the owner and not transferred when published. Most area towns have published an Images of America book. If purchased from the Historical Society, your copy will be identified by the Society’s seal and autographed by the author. 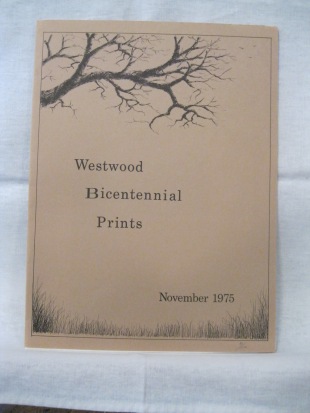 An unusual Westwood item is a set of 4 Bicentennial prints of drawings of Westwood scenes. The Limited Edition set was produced for the Bicentennial of the United States and can be enjoyed in the booklet or framed individually. 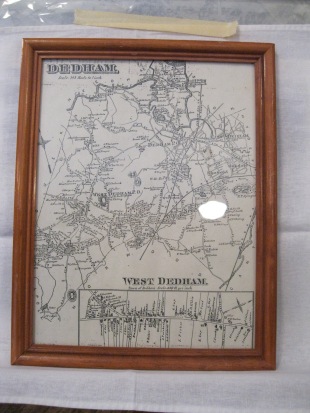 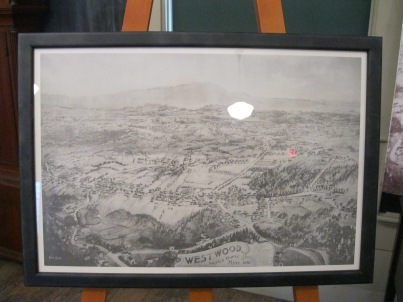 An 1898 map gives a bird’s eye view of Westwood as it looked at the turn of the last century. A photograph, used as a basis for the map drawn by artist Bert Poole, was taken from a hot-air balloon over Dover Road and Hartford Street, with the view extending across High Street to Washington Street and Blue Hills in the distance. Streets were labeled and buildings meticulously drawn in detail. Well-known landmarks visible on the map are the Colburn School, First Baptist Church, and First Parish Church. Careful observers might even find the weather station at the top of Blue Hill! The 14″ x 20″ map reprint is available at the Fisher School of the Westwood Historical Society. 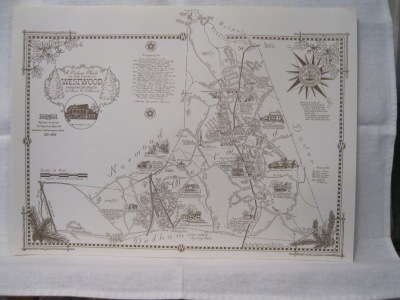 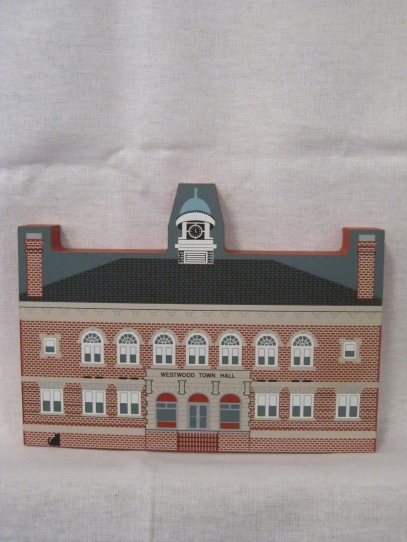 An unusual item is the replica of Westwood Town Hall building in the Cat’s Meow Series. It would complement your series of the highly collectible and popular front facades of Westwood buildings. 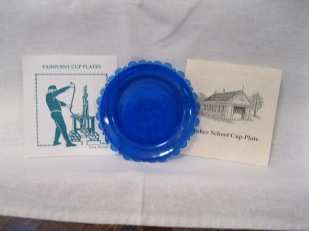 To celebrate the opening of the Fisher School, the Westwood Historical Society commissioned the Pairpoint Glass Factory in Sagamore to produce a new cup plate. The design commemorates the Fisher School on its December 5th Dedication. The glass plate was made in the popular cobalt blue color with a scalloped edge and features Margaret Philbrick’s drawing of the schoolhouse. Pairpoint crystal is internationally renowned for its high standards of beauty, quality, and craftmanship. Originally founded in 1837, the company evolved from the Mount Washington Glass Co. to the present crystal company. The collectible cup plate comes in a gift box – perfect for gift giving! 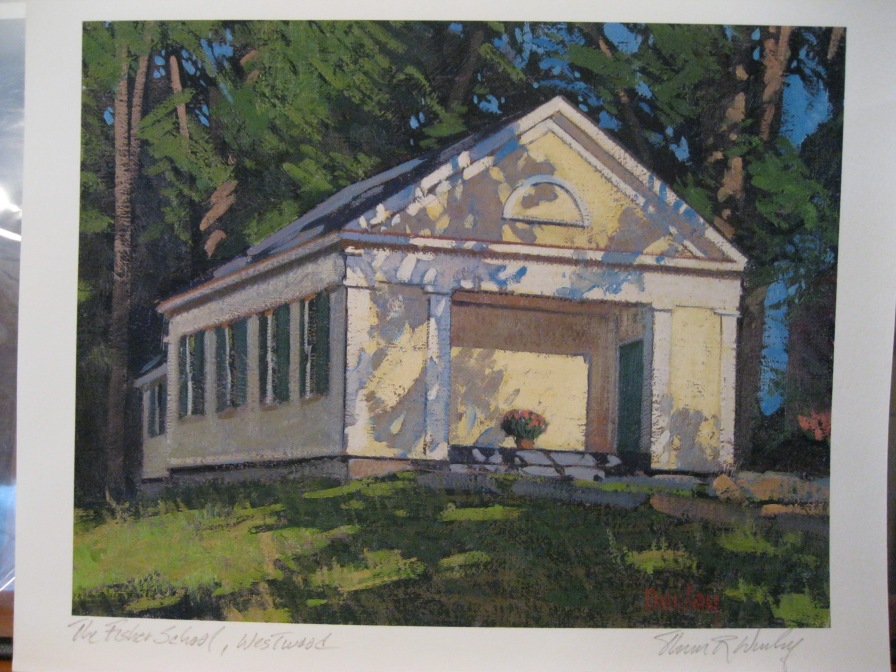 A lovely winter photograph of the Fisher School is featured on these greeting cards. There are 12 cards in a box for $8 and are perfect for sending your holiday greetings. 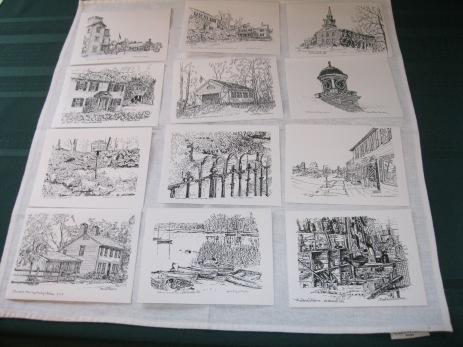 Jane Ryan Sugrue’s note cards are boxed with 12 different pen and ink sketches of Westwood scenes such as the Town Pound, Town clock, lake at Hale Reservation, Colburn School, crossroads at Islington, the Fisher School, and other historic scenes. 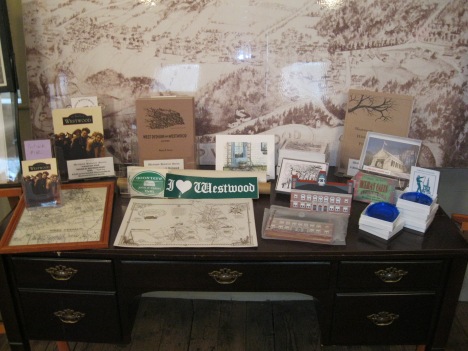