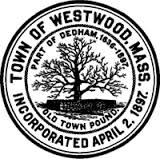 Fall 2019. Note that Atlas Obscura recently featured an article on Town Pounds and included the Westwood Town Pound! Take a look at: https://www.atlasobscura.com/articles/new-england-colonial-town-pounds.

The Town Pound is part of the first land grant made “beyond ye rockes” and located on High Street near the intersection of Route 128. In 1700 Lt. Joseph Colburn was hired to build a pound there for 40 shillings. The pound in early communities served as a place to keep errant animals until claimed by their owners. The original wooden fence was replaced some years later by the present stone wall. In 1899 the Massachusetts Legislature enacted a law requiring every city and town to adopt an official town seal. Lucius Damrell’s sketch of the Town Pound was chosen for the official Westwood Town Seal. Originally the Pound had one magnificent oak tree within its walls, which was felled by the 1938 hurricane. The age of that tree depends on the author and ranges from 200 to 600 years old. A young white oak was planted which is thriving and hopefully will withstand the traffic for future generations.

The Historical Society planted flowering shrubs and perennials at the Town Pound as part of the Town’s ‘Adopt An Island’ program. How appropriate that the Society beautify this particular location! What an opportunity to improve the important historic landmark, the symbol of Westwood, which appears on the Town Seal!

Lura Provost designed a suitable plan, using appropriate 18th century native plants, being careful not to include any invasive or exotic specimens. Davey Tree of Norwood pruned and fertilized the trees as a community service project. Ron Chiurri is the “Keeper of the Pound”, mows the grass and maintains the historic site. The white oak in the center of the pound is ailing from oak anthracnose, a rare fungus disease for oak trees. The tree may lose its leaves, then releaf and recover.